Pub regulars are getting locked up in memory of Arran

Pub regulars are getting locked up in memory of Arran

A GANG of charity fundraisers will be locked up in a cage for the weekend when they take part in a gruelling prisoner of war challenge. Two teams of four will be “jailed” for two nights outside the Waggon and Horses pub in Great Yeldham to raise money for the Smile of Arran charity.

Organiser Paul Boulter of Great Yeldham said: “They will be locked in cages that are being built out of scaffolding in the pub car park.”

“There will be several guards there and the male guards have been growing mustaches. I think there will be some bushtucker type trials. I think they are going to be quite bad, but I’m not allowed to know too much because I’m one of the prisoners.”

“We will only get the luxury of decent foot or a beer if we do well in the trials. There will also be a trial to build a train track in the garden – it will be the Bridge Over the River Colne.”

Last year the group raised about £5,000 by taking part in a “tramp-off”, which involved finding their way home after being dumped 20 miles away with no money. Landlord Mike Shiffner said all the prisoners and guards were pub regulars, but he was keeping the details secret.

He said: “We don’t want them to know what they are letting themselves in for so I can’t say too much.”

” Needless to say, over the course of the weekend there are various trials that they will have to perform.”

“It isn’t going to be the most pleasurable experience for them.”

The men will be locked up at about 5pm next Friday, July 31, and released on Sunday. 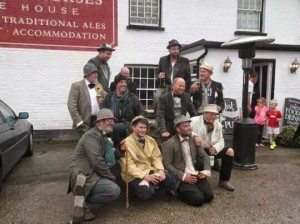 TFW ROS-FIT Thornhill Step out for the Smile of Arran